Lunar Base Design from Thessaloniki – CanSat
…
For a better experience please change your browser to CHROME, FIREFOX, OPERA or Internet Explorer. 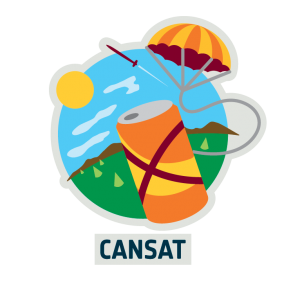 2.1.a. Where would you locate your shelter on the Moon’s surface?
Close to the Lunar Poles

2.1.b. Explain your choice from question 2.1.
Close to the Lunar Poles, more specifically on the northern rim of Peary crater. The reason why we chose it, is that it is in near-constant sunlight while still being close to a potential water source. Permanently sunlight areas would provide crucial solar energy for any future Moon settlement. Also, the nearby water could be used either for drinking or for making rocket fuel. Also, the temperatures do not fluctuate between blistering heat and unfathomable cold.

2.2.b. Explain your choice to question 2.2.
Underground. Because we need shielding from the sun’s harmful radiation and solar winds, we need to protect our base against the mini meteors that fall all over the moon and remain cost and weight effective.

3.1. What will be the size of your Moon Camp?
Highest to lowest point have a difference of 14.786 meters. The main structure measures precisely 21.886 meters length in the y-z axis and 22.927 meters length in the y-x axis. The whole architecture could be easily fit in an area with a volume of 7590 m^3 and it would need an underground space of about 17.392 meters long. The spherical entrance which also plays a protective role for the astronauts has a diameter of 7.40 meters. While the airlock corridors are about 4.654 meters long each. The ‘green house’ or else the food growth chamber is 6.135 meters high and forms an elliptical rooftop. Each room in the interior design is about 4×4×2.20 in dimensions. The bathrooms are smaller in size : about 1.5×1.5×2.20 in dimensions.

3.2.b. Explain your choice to question 3.2.
We believe that 4 astronauts are enough to accomplish the given tasks, such us daily work and experiments. While it would be difficult for 5 or more people to communicate and understand each other. Additionally, more people mean more food needed,more oxygen needed, more energy needed and of course more space needed. On the other hand 2 or fewer people lack special skills and knowledge which a group of 4 people would perfectly handle.

3.3.a Which local Moon resources would you use?
Water ice
Regolith (Lunar soil)
Sunlight
Other

3.3.b. Explain your choice to question 3.3.
In our moon mission we will definitely use the lunar ice as a source of water. We won’t only recycle the already existing water supplies from earth but we will harvest the ice of the poles as there is plenty of water stored inside. Secondly , regolith could become the building blocks of the moon camp mission, since it is possible to 3d-print the whole base with a big 3d-printer. Moreover, the sun could be the greatest source of energy since it almost always appears on the poles’s sky. Providing us with the electricity needed for our robots,vehicles and heat system to work. In addition, Helium-3 should be examined for future missions as it is a good source of nuclear power. Lastly, we will use any other element on the lunar surface for experiments.

3.4. Explain how you plan to build your project on the Moon. You should include information about the materials and building techniques you are planning to use. Highlight the unique features of your design.
For the building of our project robots will be included .We will send a spaceship with robots and industrial machines to dig the area (such as a driller) in order to build the underground part of our moon camp inside the hole they create. Afterwards, we will use large 3d printers to build the walls of the lunar base bottom to top. The already digged regolith will be the 3d- printing material, because bringing materials from earth in large quantities would cost a significant amount of money and time. Of course, we will need some materials from earth like aluminium, teflon and titanium ,in order to build a radiation protective shield around the entrance. A few trips from Earth will be enough to bring all the needed stuff. The greenhouse exterior will be made of reinforced (although translucent) glass. Our design has some unique features such as an air conditioning helix which will help the oxygen spread around the rooms. Oxygen can be prodused inside the greenhouse and be spread among the rooms through tubes.The part of the design above the surface has a hemispherical shape because edges would cause a problem regarding the inside and outside atmospheric pressure. The design also contains a small vehicle ‘garage’ and a 5 meter long lazer transmission device that will help astronauts communicate with earth at really high speeds. Every thing has been designed in their original hight,length,width etc. Two worth mentioning components are the vehicle and the air conditioning helix (a.c.h.). Astronauts need a means of transport on moon, so we designed a lunar vehicle with a working mechanical steering wheel. The other one (the a.c.h.) has a working bevel-gear mechanism, which is totally worth seeing.

3.5. Describe and explain the design of the entrance to your Moon Camp.
The entrance of our lunar base is carefully selected to be roundly shape ,so there is no edge that would possibly cause problem regarding the inside and outside atmospheric pressure. The entrance is like a corridor with two doors. The design of the entrance is like that of an airlock ,so the air gets trapped inside and never lives the interior. That guarantees that the precious oxygen doesn’t live the living area of the astronauts.

3.6. Explain how the Moon Camp provides protection for the astronauts.
The working and living places will be underground so the dangerous solar radiation does not arrive at the astronauts skin.In addition, the hemispherical entrance will include layers of teflon and aluminium ,because they are elements that don’t allow harmful radiation to pass through them.More over, meteorites won’t be able to destroy the reinforced top part of the base so the astronauts will be safe inside.

3.7. Describe the location and arrangements of the sleeping and working areas.
The sleeping and work areas are located at the bottom place of the design because sun’s radiation won’t reach down there. The sleeping room in next to the meeting room laboratory and the gym, while the laboratory and the computer room are across the other side of the design. The sleeping room contains 4 beds and an air conditioning helix. The meeting room contains chairs,a table and a big screen.The gym contains many different facilities such as bicycles,weights and gymnastic runways. In that part of the design the are also a WC and a shower.Plus ,each room has it’s own led light. On the other side of the underground part (computer room, laboratory) there are 4 computers in one room and 2 3d-printers in the other. Furthermore, you will find some bottles for experiment purposes nearby the printers. A WC is also included. Finally, there are again some led lights and air conditioning helixes.

4.1. Describe what will be the power source for the shelter.
The power source that we will utilize is solar energy it goes without saying, that is one of the main reasons we chose the location of our shelter. It’s affordable, reliable and easily accomplished. But we are ambitious about the future and depending on the state of nuclear fusion around that time we could also try to utilize the abundance of Helium-3 in the moon with later missions. (The solar panels would track the suns movement and we will have fuel cells to store energy to use while in lunar eclipses).

4.2. Describe where the water will come from.
We have chosen the location of our base to be near a water source near the lunar poles. We ‘ll use heated drills to break the frozen soil and get water from there and also when we start our mission, we will bring some water from earth and we will use a water recovery system similar to the ISS therefore almost nothing will be wasted.

4.3. Describe what will be the food source.
We will cultivate our own food in lunar greenhouses. We will opt for a balanced diet consisting of highly nutritious plants with all the nutrients we need to survive. The first floor of our greenhouse could have regular vegetables growing on soil brought from Earth. While in the second floor we could use aeroponics or aquatic farming ,since it won’t cost as much.

5.1. What would you like to study on the Moon?
The surface of the Earth preserves a tiny amount of information about its distant past,constant tectonic activity has recycled Earth’s crust and shifted landmasses. Severe weather conditions such as floods, ice storms etc. have withered away surface features over billions of years. But there is a place we can go to learn more about the past of our own planet: the moon! By studying the chemical composition of rocks and soil on our natural satellite, we could learn more about the Earth’s own geological infancy – including the emergence of life. Every year the Moon gets further from the Earth by about 1.5 inches, according to measurements. This means that eventually the moon’s effect on our planet will be direly different than it is now, which requires further study to guarantee those changes aren’t harmful to ourselves or the planet itself. Another important phenomenon to study on the moon is the Moon’s effect on the Earths tides. The greatest difference between high and low tide is around New Moon and Full Moon. During these Moon phases, the solar tide coincides with the lunar tide because the Sun and the Moon are aligned with Earth, and their gravitational forces combine to pull the ocean’s water in the same direction. This is obviously important to us, because when the tides are low, the fishing is going to be poor in that area. If we predict when the tides are going to change we can properly relay this information to fishermen so that they may efficiently do their job. Additionally, the creation of a colony in a near-Earth celestial body forms an ambitious goal of various space agencies. The organization of such a mission is complex and one of the key challenges that need to be addressed is the right nutrition of the individuals involved in the mission and the colony. A solution that is proposed is the creation of a greenhouse which will include the appropriate technology to grow vegetables that are essential for human nutrition. But in order to be able to complete such a project we need to get more information about the Moon,for example its temperature, its luminosity, its pressure etc. To sum up with, by studying the Moon we can find a lot of information about the early stages of the Earth’s formation, its effect on our planet & life on the Moon. 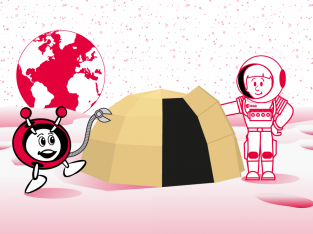 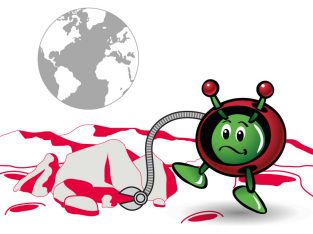 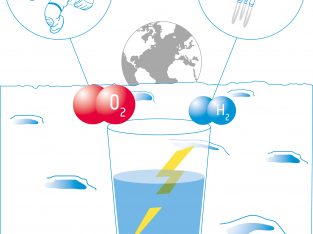 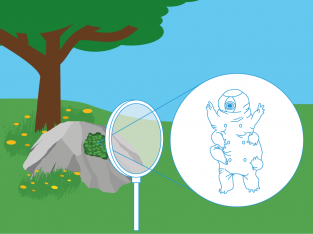 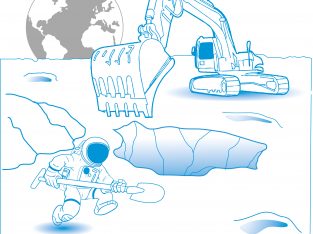 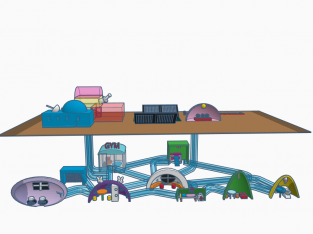 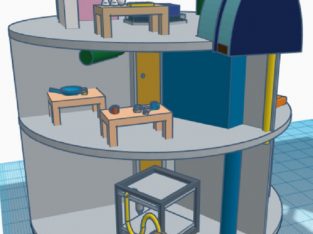 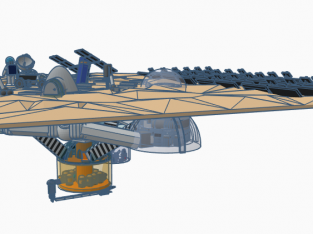 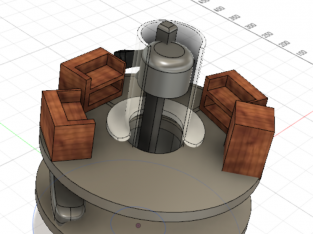 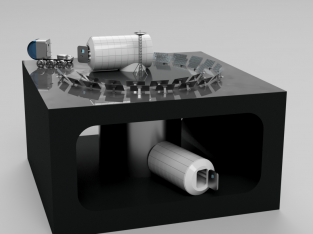 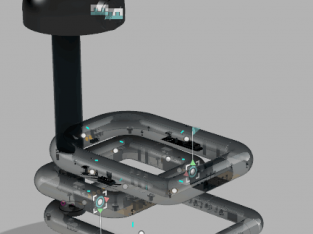 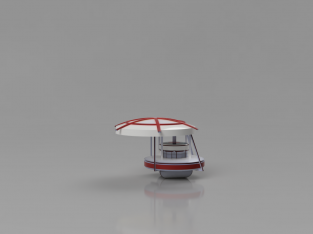 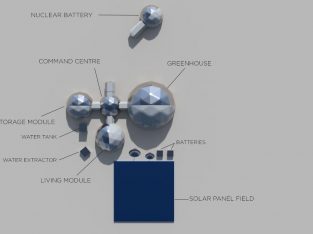